It is the best of times, it is the worst of times

The income gap is getting so bad in the United States that even some of the rich guys who can insulate themselves from the common rabble are starting to get nervous. 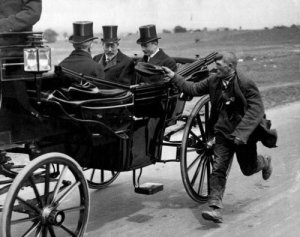 Get a job, you bum

Bill Gross, manager of Pimco, the world’s largest bond fund, said recently he believes an increase in inequality has made the U.S. less productive. “Developed economies work best when inequality of incomes are at a minimum.”

James Chanos, partner in a leading hedge fund, said people have less incentive to participate in the economy if they conclude “the game isn’t fair.”

Why would people think the game isn’t fair? Let’s see if we can spell out some of the ways.

–U.S. corporate profit margins are at record levels in part because the share of revenue going to employee wages is actually dropping, and they are paying a smaller share of their profits in taxes.

–Given all that, it’s little wonder average incomes have stagnated. Inflation-adjusted, median family income fell 6 percent in 2012 from 2002, according to the Commerce Department.

The jobs that are available are disproportionately low-paying and often part-time. Employers added a relatively healthy 204,000 jobs in October, but more than a third of them were in the low-paying restaurant and retail sectors. Wage growth has barely outpaced inflation, rising 2.2 percent in October from a year earlier.

The argument for keeping the minimum wage low is that these are entry level jobs where young people get experience and move up the ladder. But the gradual destruction of the blue collar middle class and the rise of the knowledge economy means there’s no place for a lot of people to move–they’re stuck at the bottom of the ladder.

But if you’re well educated or have skills that are in demand, you have a different outlook. Households earning $50,000 or more have become more confident over the last 18 months, according to a monthly consumer survey conducted by RBC Capital Markets.

In lower income households, confidence has stagnated. The gap in confidence between the two groups is near its widest point ever, said RBC chief U.S. economist Tom Porcelli.

Keep this in mind the next time you hear their apologists whining about the heavy tax burden borne by the wealthy and corporations. Trickle-down economics doesn’t work–it never has and it never will.

This entry was posted in Economy, Politics and tagged Economic inequality. Bookmark the permalink.