The day the idealism of youth started to die 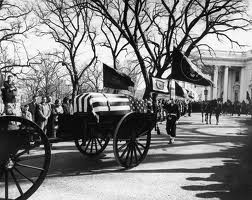 End of the dream.

If you came of age in the 1960s and were white, the low point of the decade probably happened 50 years ago today when John F. Kennedy was assassinated. (If you were black, the nadir occurred with the assassination of Martin Luther King, Jr. in 1968.)

The only time I ever saw Kennedy was when he gave his acceptance speech at the Democratic National Convention in 1960. My father, active in politics as far back as I can remember, was a delegate to the  convention so I was able to snag a good seat for the speech.

I don’t remember what he said, but I was struck by how genuinely excited people were about the prospect of Kennedy getting elected president. I’d been around politics enough by then (I was 16 at the time) to know there is little real excitement in the process.

The first two years of the Kennedy administration didn’t go well–there was the botched Bay of Pigs invasion to topple Fidel Castro and then the Cuban missile crisis that came close to starting a nuclear war–but people still believed Kennedy had a special magic that would lead the country to great things. Lee Harvey Oswald ended that notion.

But things can always get worse, and they did in the eyes of many as the decade progressed. The escalating Vietnam War and the hated draft that filled the military ranks with many people who wanted to be elsewhere fostered domestic instability that magnified other events.

Events that were considered monumental when they occurred–the Berkeley Free Speech Movement comes to mind–became sideshows when compared to the Watts and Detroit riots, not to mention the chaos at the Democratic National Convention in Chicago that essentially handed the presidency to Richard Nixon.

The assassination was big news around the world, especially England.

Then there was the assassination of King in April 1968, followed two months later by the killing of Robert Kennedy in Los Angeles. We didn’t learn about it until the following year, but the My Lai massacre was taking place in Vietnam at about the same time.

But life goes on, and while people were buffeted by these events, most of them managed to stay on course. In my case, I graduated from high school, graduated from college, spent two years in the Army, started my career, and married the love of my life in the ’60s.

That didn’t make me unique. Most of the people I knew then woke up every morning and got on with the business of life, just as they always have. But any idealistic notions we had about the political process were dead by the time 1970 rolled around.

This entry was posted in Politics and tagged Kennedy Assassination, The '60s. Bookmark the permalink.