This week’s eruption over the mere concept of a shopping center on Dorsey Drive at Highway 49 in Grass Valley revealed that many people are apparently easily duped or hoodwinked by the silver-tongued smoothies on the Grass Valley City Council. 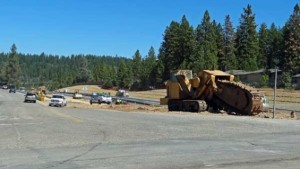 The proposal surfaces at a time when work on the long-awaited Dorsey Drive interchange is underway, a project that will add substantial value to undeveloped property in the area. This has prompted a lot of people to cry foul.

“I think the timing of this has people feeling a bit duped,” Jim Coffin told the Grass Valley Development Review Committee, the first stop in the long process of getting a development approved. “I supported the Dorsey off-ramp for what I understood (to be) access to the hospital. Now this project looks like it was already in the works.”

Supervisor Terry Lamphier, seeking re-election in a district that includes Grass Valley, told CBS13: “It just feels as if there’s been evasiveness in terms of being honest and straightforward.”

And Reinette Senum, a former mayor of Nevada City who probably pays sales tax in Grass Valley on occasion, charged the city council “failed to mention to the public that the interchange would conveniently open the floodgates to development of the surrounding properties.”

The interchange was promoted as providing easier access to Sierra Nevada Memorial Hospital, Sierra College, and even Nevada Union High School. It apparently didn’t occur to a lot of people that owners might be encouraged to develop their vacant property.

How were the people hoodwinked? Because the possibility of development didn’t occur to everybody? How were promoters of the interchange being evasive? I don’t recall anybody promising NOT to develop property if the interchange went in. Is access to the hospital not important if it means development of empty land?

The people crying foul remind me of the folks who purchase a house by the airport and then complain about the noise planes make. (Wait a minute. Didn’t we already fight that battle over the Loma Rica project?)

These charges didn’t go over well with City Council member Lisa Swarthout, who told KNCO that claims the city hoodwinked anybody “are a complete and total lie.”

Other council members have remained silent to-date. Either they’re waiting for the sniper fire to subside, or they’re going to hold their counsel until they actually have a development proposal to vote on. Then we can proceed to the lawsuit.

1 Response to Hoodwinked over the Dorsey Drive interchange! Really?