Michael Flynn: The spy who’s back out in the cold

Well, there is at least one thing Barack Obama and Donald Trump agree on: Michael Flynn is unfit for government service.

Obama came to that conclusion when he fired Flynn from the top job at the U.S. Defense Intelligence Agency. Trump apparently thought that was a feather in Flynn’s cap, because he immediately embraced him as a supporter during the presidential campaign. 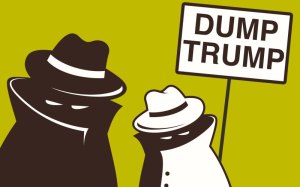 Who’s talking to the media?

As the former head of the DIA, Flynn surely must have known that the five conversations he had with Russian Ambassador Sergey Kislyak the day Obama announced he was expelling 35 diplomats would be subject to electronic surveillance. That didn’t stop him from lying to Vice President Mike Pence about the nature of the conversations, which ultimately led to his firing.

What’s most interesting about Flynn’s conversations with Kislyak is that they all occurred after Obama announced the expulsions and before Russian President Vladimir Putin surprised just about everybody by announcing he wouldn’t retaliate. You have to wonder what Flynn said to the ambassador, and who–if anybody–authorized him to say it.

The Republican chairs of the relevant Congressional committees, showing their lack of a bipartisan backbone, are not interested in pursuing such questions, and the usual conservative media lap-dogs are trying to change the subject by calling for the heads of those who leaked the details about Flynn’s phone calls.

They would like to believe that the leaked information came from former members of the Obama administration, or from Hillary partisans who are in positions to know. That may be the case, but given Trump’s management style and the way his administration has functioned to-date, the information could very well have come from The White House.

Trump’s management style apparently encourages multiple competing views and a walk-in-anytime Oval Office policy. Nobody seems to be managing any of this and, by The Wall Street Journal’s estimate, there are six different power centers operating in The White House.

That might work in private industry, but it just fuels power struggles in Washington, and one way you gain power is by making the other guys look bad. This can be accomplished in part by leaking embarrassing information to the news media, which can be counted on to run with any story it can confirm.

Take the recent leak of the transcripts of the phone calls Trump had with the president of Mexico and the prime minister of Australia. Aside from the fact they showed Trump “mischaracterized” the substance of the conversations (no surprise there), you have to wonder what was accomplished by leaking them. My guess is the leak is part of an internal struggle to influence Trump on such foreign policy matters.

Chief of Staff Reince Priebus would normally be expected to impose order among the staff, but apparently hasn’t been given the power to do so. Now he’s catching the blame for all of the chaos that seems to be a daily feature of the administration, and Breitbart News reports that Trump has lost confidence in him.

Who’s Breitbart’s source? They cite “somebody close to the president,” whoever that might be. That’s the way it works in Washington.

4 Responses to Michael Flynn: The spy who’s back out in the cold