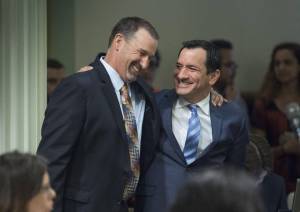 Our very own Assemblyman Brian Dahle has been elected to lead the Republican caucus in the state Assembly, not that it means much in the general scheme of things.

Since the Republicans control barely 31 percent of the seats in the state Assembly and continue to lose registered voters, the Democrats rarely need the GOP to get anything passed.

Dahle’s chief responsibility will consist of either complaining that the Republicans are being left out of the decision-making, or that the Democrats continue to promote job-killer legislation. The whiner-in-chief, if you will.

Dahle replaces Assemblyman Chad Mayes, who incurred the wrath of conservatives for negotiating a deal to renew California’s cap-and-trade program. But Dahle suggested the GOP may have to make a greater effort to work with Democrats if the party is to remain relevant. “We need to be at the table when these big policy decisions are going to be made,” he told The Sacramento Bee.

He might be able to throw a couple of goodies our way if he plays nice with Assembly Speaker Anthony Rendon; he certainly hasn’t done us much good to-date. But he better be careful–more pictures like the one above in The Bee will cause he fellow Republicans to think he’s a RINO.