In case you haven’t noticed, we’re in a contest to fill the vacant District 1 state Senate seat that represents Nevada County, part of Placer County, and other areas north of us.

Election day is actually Tuesday, but most people are voting by mail to decide if one of four Republicans or a Democrat will fill the post. If nobody gets 50 percent plus one of the votes cast, the top two vote getters will advance to a runoff.

That would figure to involve the two best know candidates in the race, District 1 Assemblyman Brian Dahle and Assemblyman Kevin Kiley of Loomis, both Republicans. The only campaign literature I’ve received (as of Saturday) is two mailers from “Taxfighters for Brian Dahle for Senate 2019” that assume voters are ignorant. 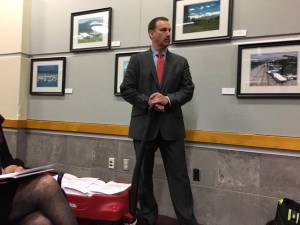 Brian Dahle and his little red wagon: In

The flyers have pictures of both candidates and list three political positions for each that presumably makes them appealing. There’s only one problem with this: While Baird’s name is on the ballot, he withdrew from the race several weeks ago and is not an active candidate.

In other words, the “Taxfighters” want Democrats to vote for a non-candidate to draw votes away from Silke Pflueger, the only actual Democrat in the race.

That would make it easier for Dahle to make the run-off and possible win the election outright, particularly since Kiley faces two Republican candidates from Loomis and Placerville. One of them, Rex Hime, has raised a lot of money for the race.

“Taxfighters” obviously believe a lot of voters are ignorant about Baird and will fall into their trap when they vote. The mailers are reminiscent of a flyer put out by supporters of Rep. Doug LaMalfa that featured a doctored picture of Democratic challenger Audrey Denney pledging to faithfully follow House Speaker Nancy Pelosi. LaMalfa later laughed it off as a “joke.”

“Taxfighters” say they’re independent of Dahle’s campaign but don’t tell you much about themselves. They list an IP address that was acquired in late February and will probably be gone next week.

The flyers were paid for by the California Professional Firefighters PAC with major funding from the California Association of Realtors and the California Correctional Peace Officers Association. If you know anybody who belongs to those three outfits, you might want to ask them why they support such shoddy campaign practices.

If asked about the mailers, Dahle’s campaign  would probably take the Sergeant Schultz approach: “I know nothing.” But this is another example of the work of Republican strategists who clearly think there are a lot of stupid, ignorant voters in the north state.

If they’re referring to Republicans who lap up this stuff, I can see where they’d get that idea.